Norton was founded in 1898 by James Lansdowne as a manufacturer of fittings and parts for bicycles.  Motor cycle production began in 1902 using French and Swiss engines.

Norton motorcycles have always been closely associated with racing and one of their bikes (with a Peugeot engine) won the twin cylinder class in the first Isle of Man TT races in 1907. 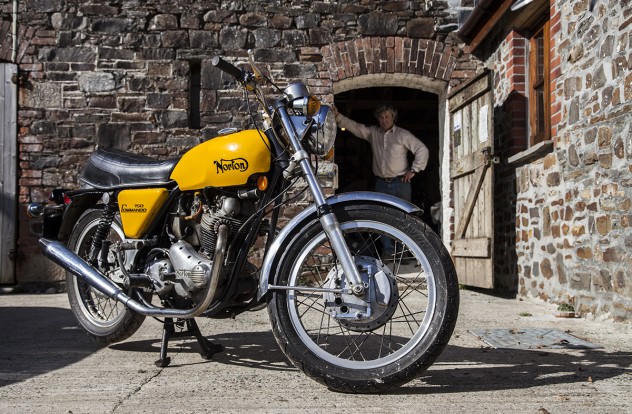 The first Norton engine was a single cylinder 633cc side valve named The Big Four, which continued with few changes from 1908 until the late 1950s.

The first overhead valve Norton appeared in the early 1920s.  This was the model 18, and it continued the racing successes begun by The Big Four.  In 1924 Alec Bennett won the Senior TT race, and in 1927 a more powerful engine was developed.  Designed by Walter Moore, The Cam Shaft One (CS1), was based closely on the pushrod ES2 engine, and won the Senior TT that year.  When Moore left to work for NSU in 1930 the design was radically altered by Arthur Carroll and became the basis for the engine which was to win seven Senior TT races between 1931 and 1938.

With the outbreak of war, Norton withdrew from racing and focused on producing motorcycles for the military in the form of the WD 16H and the WD Big Four. It is estimated that almost a quarter of military motorcycles were Nortons, at 100,000.

In 1949 the 497cc Model 7 with a twin cylinder engine designed by Bert Hopwood appeared.  The chassis came from the ES2 single, with telescopic front and plunger rear suspension.  This motor cycle later became known as the Norton Dominator, which in various forms remained in production until the very end as the Commando.

In this post war period Norton’s  single cylinder machines had struggled to regain their racing successes  against multi-cylinder AJS and Italian machines.  This all changed with the appearance of the famous duplex loop, all welded, Featherbed frame developed for Norton by the Mc Candless brothers of Belfast in January 1950.  The Featherbed frame was used in the legendary Manx Norton and raced by riders including Geoff Duke, John Surtees and Derek Minter.  The Featherbed frame soon established itself as the benchmark against which all other frames were judged.  In 1951 the Norton Dominator became available to export markets as the Model 88 (500cc) with a Featherbed frame.  As production of this frame increased so it became a regular production model and available on other models within the Norton range.  These were initially the so-called Wideline frames, with the top frame tubes 11.5 inches apart, it would be 1960

before the top frame tubes were curved inwards at the rear of the tank to form the narrower and much more comfortable Slimline frame.

In 1953 Norton Motors was taken over by AMC (Associated Motorcycles) who owned AJS, Matchless, James and Frances Barnett.  The Norton factory in Bracebridge Street was closed and production moved to the AMC works at Woolwich in SE London in 1962 to cut costs.  At this time AMC dropped the long running Roadster range, including the ES2 500 single, and the Model 50 350 single.  Instead a family of three similar smaller capacity machines had been developed by Norton.  These were Norton’s first use of unit construction.  The engine was an entirely new design by Bert Hopwood using the frame and running gear  from the Francis Barnett range.

Other notable AMC machines were the 1961 Dominator 650ss, the 1962 Norton Atlas 750 and the famous Norton P11 Desert Racer which was sold up until 1962, and used a Norton Atlas engine in a modified Matchless G85 CS scrambler frame.

By the late 1960s the whole British motorcycle industry was in serious decline.  Imports of sophisticated, reliable machines from Japan, along with the sudden emergence of other modes of transport such as the very trendy and relatively cheap Austin Mini, resulted in a fall in demand for home produced motorcycles. Almost overnight the sidecar became a thing of the past.

AMC became insolvent in 1966 and was reformed as Norton-Villiers, part of Manganese Bronze Holdings Ltd.  At this time the 750 Atlas was Norton’s best motorcycle, it was fast and handled well, the only problem being that there was a serious vibration problem.

In an attempt to solve this issue, Norton employed Dr. Stefan Bauer from Rolls Royce to develop a new frame.

Thus, the Isolastic system was born, where the big Atlas engine is installed in a separate sub frame which is then isolated from the main frame by large adjustable rubber mounts.

This system worked very well, and the Norton Commando 750 was the result.

Introduced in 1967 the Commando was the most powerful British motorcycle of its day, and as long as the Isolastic bushes were properly adjusted, handling was excellent.

Over the following years the Commando saw a number of changes.  The Combat engine released in 1972. It was more powerful, but was prone to bottom end failure until the main bearings were re-designed.

Financial difficulties deepened in the mid 70s.  BSA had merged with Norton Villiers in order to qualify for aid from the British Government in 1972, and in 1973 Norton Villiers Triumph (NVT) was the result.

Government subsidies supported the business through various industrial disputes and factory closures for the next few years, but by 1975 the range had been reduced to just two models, the Mark III Interstate and the Roadster.

The last machines were made in October 1977.

Late Roadsters are relatively rare because most of these last bikes were the more expensive Interstate models.

The Commando is regarded by many as the best ever British twin, light and powerful with beautiful lines and tons of character.   It won the MCN machine of the Year competition for 5  years in a row from 1968 to 1972.  It sold well for the 10 years it was in production, it is still being made today by Les Emery of Norvil, and a new updated machine has just been released (2013), and was entered in the Senior Isle of Man TT race of that year.

NVT went into receivership in 1975 as a result of the government recalling a load of £4,000,000.  Redundancies followed, and despite attempts to continue production at Wolverhampton through the development of the Wulf engine, this factory closed.  The Small Heath/Meriden sector  of NVT was rescued through Government subsidies from Industry Secretary, Tony Benn, but this did not include Commando production.

Norton  was re-launched as a rotary engined model in Lichfield in 1987 using a 588cc air cooled , twin rotor Wankel engine.  The civilian model, named the Classic , was also available as the Interpol 2 for police forces and the RAC.

The models were improved in 1989 to produce the water cooled Commander, and later the Spondon-framed 95hp F1. This model was a de-tuned road-going sports model based on the Norton RCW588 racing machine which won many races including and the Senior TT in 1992 ridden by Steve Hislop and the British F1 title ridden by Steve Spray.

Although the last Norton Commando to be built by NVT was made in 1977, this was not the end of the Commando.  Companies such as Norvil in the UK , and two companies in the United States, Colorado Norton Works and Kenny Dreer’s ‘Vintage Rebuilds’, continued limited production.

These were actually remanufactured original motorcycles which usually incorporated modern advances such as better brakes and improved engine performance.

Kenny Dreer began by restoring Commandos, and then moved on to produce whole machines based on the original design with chassis improvements, this was the VR880.  By 2006 his Oregon based company Norton Motor Cycles USA had developed a completely new machine, the 961cc  Norton 961 Commando.  This was never produced in America because of lack of funding.

In 2009 Norton Motor Cycles was brought back to the UK after Derbyshire businessman, Stuart Garner, bought the rights to the brand from an American investment banker.  The new enterprise at Donnington Park began motorcycle production based on the Kenny Dreer 961 Commando with some significant design changes.  The workshop was set up next to Donnington Park race track and production began in April 2010. At that time it took two staff a day to build one motorcycle. At present about 75% of the bike is British, and the management’s target is to make this figure 100%.

Production is around 200 bikes a year, and in 2012 Norton entered the TT races with the SG1. Norton state that ‘after promising results in 2013, the 2014 season and the long term future look bright’.