Matchless motorcycles were produced by Collier and Sons at Plumstead, London.The first machine was made in 1899 and Henry Herbert Collier and his sons Charlie and Harry went into production in 1901.  Charlie won the first TT singles race in 1907 at an average speed of 38.2 mph and a time of 4hrs and 8 minutes. Further wins in 1909 and 1910 improved their public image. 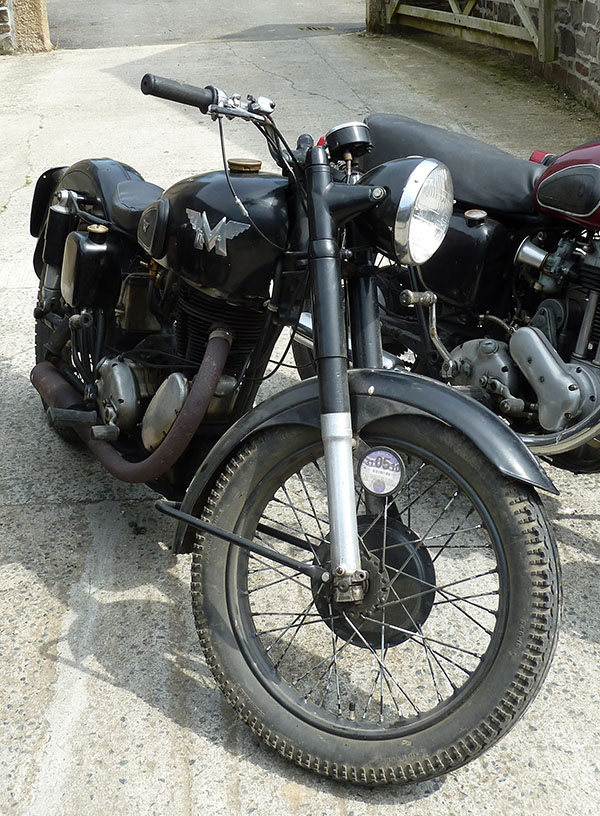 Initially Matchless used engines from other manufacturers such as the JAP V Twin, but from 1912 they made their own. Best known for their reliable good quality range of singles, in the 1930s Matchless produced several V Twins. The 397cc Matchless Silver Arrow of 1931 was designed by Charlie, it was underpowered and did not sell.  Similarly unsuccessful was the 990cc X4 side valve V twin of the mid thirties, although sharing the same engine as the Brough Superior SS80. (Although admittedly Matchless built this engine to Brough’s own spec.).  After the failure of the Silver Arrow, the youngest of the Collier sons, ‘Mr Bert’ ,designed the Matchless Silver Hawk.  The engine was a 593cc OHV V4, basically two Silver Arrow V Twin engines joined together side-by-side.  At a price of £75 in 1932 this 80 mph machine was £5 more expensive than a 600cc Ariel Square 4, and disappointing sales led to its withdrawal in 1935.

In 1930 AJS Motorcycles of Wolverhampton were in financial difficulties.  Despite interest from other firms  such as BSA, it was the Collier Bros of Matchless who saved the AJS business in 1931 and transferred it to Woolwich Arsenal in SE London.  The Stevens Bros of AJS reverted back to engine production in smaller premises in Wolverhampton.

In 1936 Matchless also bought Sunbeam Motorcycles, (and later sold it to BSA in 1943, although the acquisition of Sunbeam, a make always associated with an immaculate finish, did seem to have a positive effect on quality).

Many AJS enthusiasts believe that the only true AJS motorcycles were those produced before the take-over by Matchless in 1931, because after this date the two separate brands gradually merged until the models had become very similar apart from some detail and the badge. ‘True’ AJS motorcycles after 1931 such as the V 4 ‘Porcupine’ and the OHC 350 and 500 singles owed their existence to racing, which the Collier brothers supported on a somewhat reduced budget for its advertising value.

1941 saw the introduction ‘teledraulic’ (telescopic) front forks to the domestic market, these were developed by Matchless for the military G3 model, of which they supplied 80,000 during the second world war.  The post war period saw the development of a range of differing capacity machines available with either AJS or Matchless badges. This resulted in a rather confusing list of model designations. The AMC 350 single for example, was the AJS model G16 or the Matchless G3 (and the G3L had telescopic front forks, while the G3LS had telescopic front forks and rear springing).

In 1958 Matchless / AJS began building ‘lightweight’ unit construction 250cc machines (AJS model 14 /  Matchless G2) , although in reality these were not a great deal lighter than the pre-unit models. 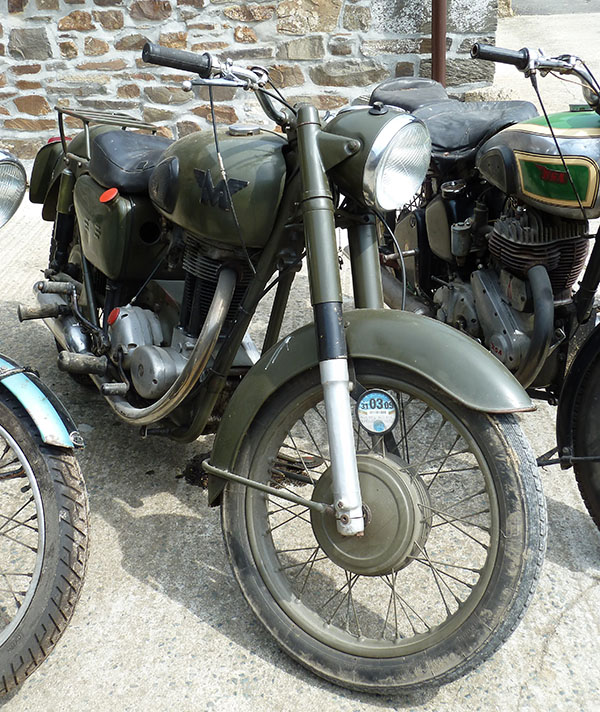 Norton closed their Bracebridge Street factory in 1962, and became part of the AMC business.  Production of Matchless and AMC machines struggled on until 1966 when the business finally folded and was taken over by Manganese Bronze Holdings until the new name of Norton-Villiers.  At this time Norton was the only bright star in the collection.

The final Matchless machine was the P11 Ranger, which was available with either Norton or Matchless badges.  The P11 was a Norton Atlas 750cc engine mounted in a Matchless G85 CS frame, and was an export model designed for desert racing. It was very fast, and is highly sought after today, as are other scramble/trials variants of Matchless, AJS, and Norton.

The Matchless name was briefly resurrected when Torquay businessman and motorcycle enthusiast, Les Harris, began producing his own Matchless G80 at Newton Abbot.  Earlier in 1985 Les had begun manufacturing Triumph 750cc Bonnevilles under license from John Bloor (the new owner of Triumph since the closure of Meriden in 1983). In 1988 Les made the decision not to re-licence the rights to the Triumph and moved on to make his own design of the Matchless G80 instead.  These machines had Rotax 494cc SOHC air cooled engines, and were available with disc brakes and electric start.  Production ceased with the 1990 recession.