BSA began in 1861 as the Birmingham Small Arms Company, formed to manufacture munitions for the British Empire.  The emblem depicts a stack of rifles known as the ‘piled arms’ , in 1880 BSA started making bicycles and by the early 1900s they were making  motor cycles using a Belgian Minerva engine mounted in a pedal cycle frame.  The first complete BSA motorcycle was produced in 1910  with a  499cc 3½HP engine.  It was well made and competitively priced and marked the start of BSA’s domination of the British motorcycle industry. For the next  60 years BSA remained the largest British  manufacturer, and for much of that time was the largest motorcycle manufacturer in the world. 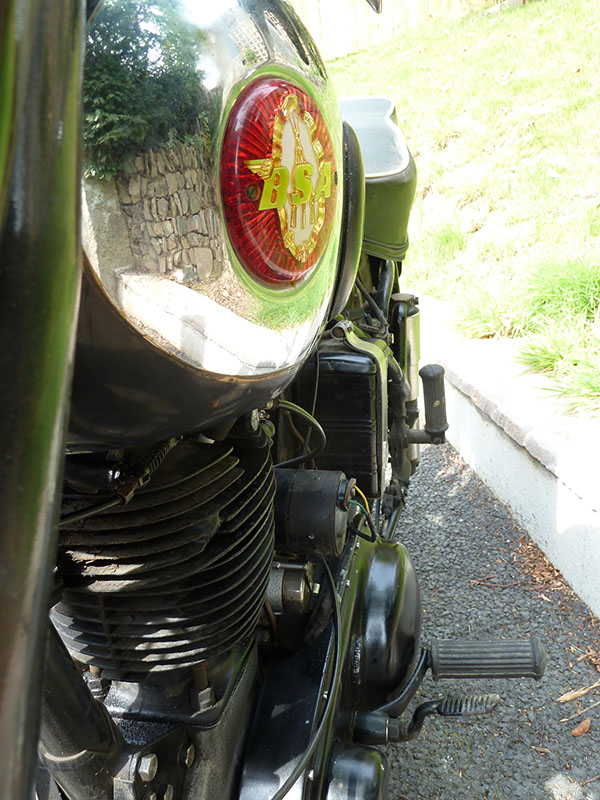 In 1913 the 557cc model H was produced with a two speed chain driven transmission.  After a profitable period during the first world war, when BSA supplied the British Army with both guns and motorcycles, the company concentrated on producing popular ‘ride-to-work’ side valve and overhead valve singles, although  their first V- twin appeared at the 1919 Olympia Show.

Production in the 1930s centred on the Herbert Perkins designed 499cc Blue Star, which was later enlarged to 596cc.

During the Second World War, the 500cc side valve M20 became a common sight in the British Army, while the M21 was the 600cc version of this sidevalve single .  After the war a new range of motorcycles were launched including models from Ariel (taken over in 1944), four new models from BSA, and a new in-line twin from Sunbeam (taken over in 1948).

In 1937 Walter Handley had lapped the Brooklands race circuit at over 100mph on a 500cc BSA Empire Star tuned to run on alcohol.  The British Motorcycle Racing Club awarded a small lapel badge in the shape of a gold star surrounding the magic number of 100 to anyone who lapped the very bumpy Brooklands Bowl at over 100mph. Qualifiers were very few.  This led to the name chosen for the M24 production version of Handley’s racer in 1938 and the later re-designed 350 and 500 Gold Stars by Val Page in 1947/9.  For more than 10 years the Gold Star was unbeatable in all forms of motor sport.

The production of the popular ‘ride-to-work’ motorcycles continued, the 350 B31 was introduced in 1945 and gained telescopic front forks which gave it a distinct advantage over the competition.  In that same year the larger 500cc B33 appeared and a year later in 1948 came the M33.  This was a rather odd mixture of the B33 OHV engine mounted in the old M series frame and was intended for side-car use. 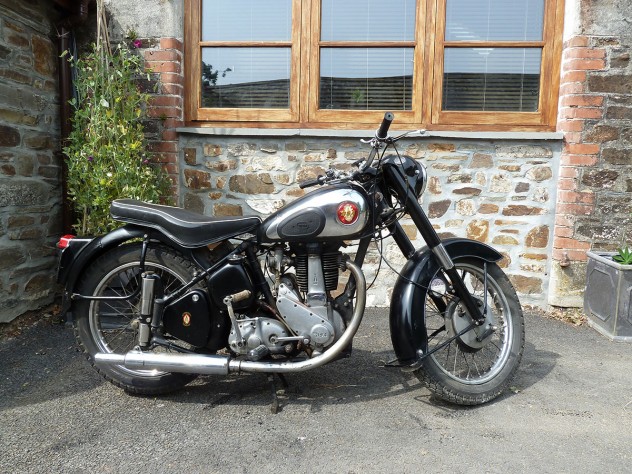 Another important motorcycle for BSA was the Bantam.  This was the most popular motorcycle BSA ever made and was introduced in 1946, just after the war.  It was a 125cc two-stroke and the engine bore a strong resemblance to the German DKW, a similarity which seems most likely to be due to war reparations, although never officially verified. These machines are now very popular on the trials scene.

The 1950s and early 60s were the best years for BSA, they were producing around 75,000 machines a year in 1954 and were exporting to 150 different countries.  Their range of machines ran from scooters and reliable work horses such as the B31 or Bantam to road racers like the Rocket Gold Star, with a range of engine capacities from 150 to 650cc.

Trouble began to appear for BSA later in the 1960s with the arrival of reliable stylish Japanese motorcycles with better performance and a more modern image.

The introduction of the Austin mini in 1959 with a price of under £500 also hastened the demise  of the motorcycle as an everyday means of transport for the masses, especially with a  sidecar attached.

By the late 1960s, despite initiatives such as the Rocket 3, BSA was in deep financial trouble.

The new triples introduced in 1968 were upstaged by the similarly priced but more technically advanced four cylinder Honda 750. With its four chrome silencers and super smooth engine it seemed light years ahead. Although the handling was not in the same league as the BSA or Triumph bikes, it was an instant hit and within two years, BSA sales were in decline.

In 1971 BSA went through a process of reorganisation, and production was moved to the Triumph factory in Meriden, while engines and components were still manufactured at the BSA Small Heath factory in Birmingham.

1972 saw a merger with the Norton-Villiers business, a government funded national motorcycle combine under the management of Dennis Poore.  This led to the formation of Norton-Villiers Triumph, and although BSA was not included in their title they produced four models under this name up to 1973:  the Gold Star (500cc), the Thunderbolt (650cc), the Lightening (650cc) and the Rocket 3 (750cc).  Unfortunately the idea of combining the production of Triumph, BSA and Norton was opposed by the workforce.  BSA and Norton was closed down while Triumph managed to survive another four years.  The plan had been to concentrate all production at the BSA Small Heath factory.  Sadly the Triumph workforce resisted this and they occupied their factory to form a workers co-operative.  Over the next two years 7000 employees lost their jobs and Norton’s Wolverhampton factory was closed.  The last bikes left the BSA factory in 1973 and Small Heath closed.  The only survivor was the Triumph Co-operative, which lasted another four years until 1976.

See the Triumph section for the re-birth of Triumph.