Ariel began business as a pedal cycle manufacturer very early on around 1870.

It entered motorcycle production around 1898 with a tricycle in which the engine was mounted ahead of the rear wheel.  In 1905 motorcycle production was moved into the car business at Components Ltd., Selly Oak by Charles Sangster, the first member of the family to become interested in the new business.

Their main machine at the time was a 4HP side-valve designed by White and Poppe.  At this stage some of the great names of British motorcycling begin to appear.  Charles Sangster’s son, Jack was to play a large part in motorcycle production in the Midlands.  His first step was to employ the services of a brilliant new designer called Valentine Page, and in turn later on in 1928, Page employed an apprentice designer called Herbert Hopwood.

Both these names appear over and over again through the following years. 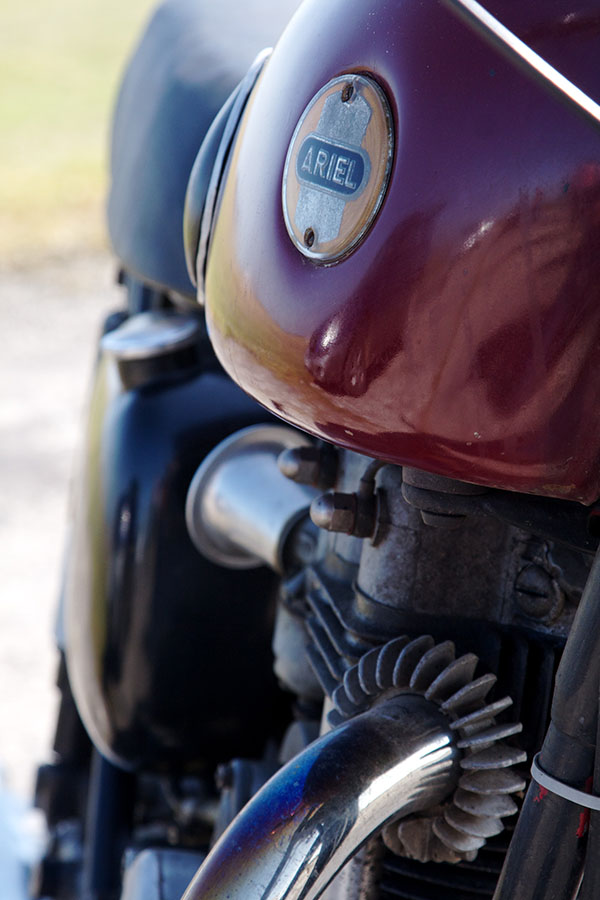 The Ariel range consisted of straight forward singles designed by Val Page, of side valve and overhead valve type, and 500 and 550cc sizes.

The Square Four appeared from 1940 onwards, initially in 500 form, then 600cc and finally 997cc.  At around the same time Edward Turner revamped the standard 500 with a larger new petrol tank in red and chrome and some engine tuning changes to produce the first Ariel Red Hunter.  Within a short while 350 and 250 versions had been added to the range.

The new models proved reliable and popular, and made Mr. Sangster enough money to later acquire the Triumph business in 1936.  Edward Turner moved with Mr Turner to Triumph in the same year.  Val Page, in 1948, designed the 500 OHV Twin and carried out the last stages of development on the Square Four.  The last phase was the evolution of the 250 Leader, which proved to be Ariel’s biggest seller – mainly in the form of the later Ariel Arrow.

Ariel were taken over by BSA in 1944 and in 1960 production moved from Selly-Oak  to the BSA Small Heath factory where the original Ariel design died (with the brief exception of the Page-designed 50cc Pixie which was soon rejected in favour of a BSA design based on the Tiger Cub).

The factory finally closed in 1967, the last Ariels in production were the Leader and Arrow,  produced until 1965

Perhaps the best known motorcycle produced by Ariel was the Square Four.  In 1928 a London motorcycle dealer called Edward Turner had the idea of producing a compact four cylinder engine.  At this time he was a small volume producer of his own single cylinder 350cc overhead camshaft engine.  Legend has it that Edward Turner sketched his idea on the back of a cigarette packet and approached a number of motorcycle factories in the Midlands with no success until he met  Jack Sangster, managing Director of the Ariel factory at Selly-Oak.  Sangster agreed to back the idea and provided Turner with a small office and assistant draughtsman Bert Hopwood.

Although plagued by overheating problems and dropped from production in 1958, the Square Four remains one of the most famous British motorcycles, and one that was to see a rebirth in the 1970s.  George and Tim Healey were Ariel Square Four enthusiasts who developed the 1000cc engines throughout the 1960s for racing.  When Ariel production ended, the Healey Brothers managed to acquire a huge volume of spare parts and in 1971 began production of the Healey 1000/4.  At a small workshop in Bartlett Road,  Redditch,  close to the old Royal Enfield factory.  It was launched at the 1971 Earls Court motorcycle show, top speed 120mph, 52bhp @ 6000rpm.  Only 28 Healey motorcycles were ever built, some with Egli frames and production ceased in 1977.